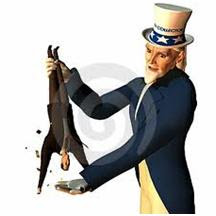 Not long ago, I went to a local school board meeting in the town where I live north of New York City. The meeting was about the proposed school budget, which voters in our town get to vote on. Our district was spending $28,000 per student, and I got up to the microphone and suggested this was too high, and that high property taxes were starting to have a pernicious effect on the town.

Cue the disapproving shaking of heads. He wants to take money from our children!
The next woman got up to the mic and said that we needed large school budgets to protect our home values. Then she declared those of us in opposition as "greedy." What I wish I had then said was this:
This town has been unfailingly generous to the school system for decades. In fact, the growth in the school budget has been close to 8%, far outpacing inflation. And yes, while good schools help home values, there reaches a tipping point where high taxes hurt more than good schools help. We passed that tipping point long ago. Now, property taxes are crushing our home values. Just as importantly, they are changing the culture of our town. We are becoming a temporary residence for people with school age children. They stay as long as they have kids in school, then leave. Retirees, who had paid off their mortgages years ago, can no longer remain because of property taxes. The voraciousness of the school system is slowly destroying our town from the inside, and yet you call me greedy?
The point here is that there is a moral and social component to keeping taxes low - it's not simply about individuals wanting to keep more money in their pockets. This is an argument that, in particular, Republicans need to hear, because while they profess to like low taxes, they retreat into their turtle shells  every time a Democrat yells, "Tax cuts are for the rich!"
Republicans understand that tax moderation spurs economic activity. But not all possess the philosophical underpinning that gives one the confidence to fend off specious attacks. Many don't, in a nutshell, understand the morality of their own position. This makes them weak advocates.
My town is a great example. Taxes are driving away the elderly and actually breaking up multi generational families. The town is slowly losing its unique culture and institutional memory. Oh, and yes, our home values are getting crushed, but that's not an argument that the left is particularly concerned with. Playing on their pitch, though, they are supposed to be concerned with things like culture and population diversity. So they tell us, almost constantly. And yet their position on matters of tax runs counter to their own goals.
I remember Reagan's trickle down thesis being mocked, but history shows us over and over again that it is precisely how the world works, and thank goodness for that. Job creation - from CEO down to night janitor - doesn't happen without business creation. Business creation doesn't happen unless those that have capital (the rich!) can be enticed to remove it from the comfort of a bank account and risk it on some new enterprise. There has to be a reward in it, in other words.
That taxes affect economic behavior would seem to be straightforward enough, but policy makers rarely stop to consider it. Remember the Clinton era luxury tax? It was applied to expensive cars and boats, and the intent was to get more money out of rich people. Do you remember what happened? Rich people stopped buying. In particular, they stopped buying boats. The immediate and unintended consequence of this was that shipyards in Maine went out of business and lots of workers were thrown out of work. Rich people can do just fine without a boat, middle class workers cannot do fine without employment. Where's the morality in that?
There exists, I would suggest, a "taxation morality curve" that may look like this: 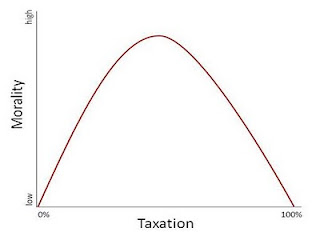 Sometimes concepts are understood most easily if one looks at the most extreme examples first. Zero taxation anywhere in society - the left edge of my graph - gets a score of "zero" morality. Government couldn't exist, and therefore there would be no property rights or assurance of liberty. Society would be dominated by well armed thieves. This is not conjecture, we can see it today in places like Mogadishu that have no functioning government.
The other end of the spectrum - full confiscatory taxation - produces the same result. At a 100% marginal tax rate, the entire economy would operate on the black market. Government couldn't exist since it couldn't collect anything. Thus, again, we would have a society dominated by thieves and violent anarchy. Justice would be a distant notion. I will also give this society a morality score of zero.
Since we know it is possible to construct a moral society somewhere in between, it therefore has to be that there exists a morality curve. This is interesting, because it is then a given that some taxation is highly moral. It pays for the things we need to preserve our rights and liberty. Rights are preserved, for instance, by the existence of our legal system, which must be supported by courts, public prosecutors, etc. Our liberty is preserved by a system of national defense as well as domestic law enforcement. These are not the only examples, but they are certainly the most important.
What's more interesting, though, is that after a certain point, marginal taxation necessarily decreases societal morality. If the curve ends up at zero, it has to go into decline at some point. As with property taxes in my town, taxation manufactures immoral outcomes. Those immoral outcomes fall hardest on the working classes, not the rich.
It is no coincidence that my graph looks a whole lot like the Laffer Curve, which postulates that after a certain level of taxation, revenues decline. The existence of the Laffer Curve - as well as the Morality Curve - cannot be in doubt. The open issue is the shape of these curves, i.e. at what point of taxation does revenue or morality decline? I believe the "real" morality curve (and Laffer Curve) looks something like this: 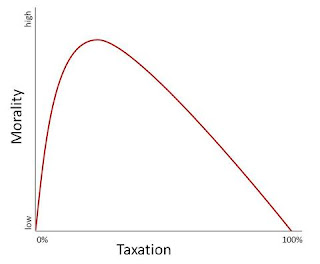 But back to the process. How, exactly, does taxation create immorality? If you have been following these letters, you know I have looked extensively at state-by-state fiscal and taxation comparisons. Many states like New York, California, and Illinois are in dire straits and need to close enormous budget gaps. Many want to raise marginal rates, particularly on top earners. This is a bad idea with a highly immoral outcome.
Witness the recent experience of Maryland, where the state legislature raised the top rate on millionaire households to 6.25% from 4.75%. Using static analysis - which postulates that behavior is never affected by rate changes - they estimated that they would collect an extra $106 million in revenue. Instead tax receipts from rich filers - wait for it - fell by $257 million.
The number of millionaires filing fell by a whopping 30%. Certainly, some had income declines, but fully 12% didn't file, suggesting that most had just up and left. I'm guessing Florida is the beneficiary. (See: http://thenakeddollar.blogspot.com/2010/03/buy-florida-real-estate-plus-what-not.html.) You see, the people who have the most resources - and pay the lion's share of the taxes - are precisely the ones that can leave the easiest. In all likelihood, they already have homes in other states. Rush Limbaugh moving to Florida is costing New York close to $50 million over the life of his contract. How many dock workers or bus drivers do you need to cover that loss? LeBron James not coming to New York cost the state $12 million.
I'm not asking you to feel sorry for LeBron, Rush, or any of the other rich folks. Yes, it's immoral that they have to decide where they live based on something as ridiculous as tax rates, but they'll get along somehow. What's really immoral is what happens to the people who don't have the same ability to live where they want. If you run a hedge fund, you can do it from anywhere. If you depend on others for your employment, you can try to move, but you'd have to find someone else willing to hire you. Good luck with that right now.
Businesses are also much more mobile than in the past. Once upon a time, if the state of Michigan raised taxes on the auto industry, they could count on GM (et al) to swallow hard and pony up. Now, they can outsource. Take a look at Detroit and tell me that's not exactly what happened: 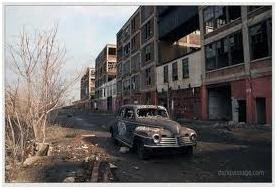 But more to the point, today's businesses are more information based. Why does an internet company need to be based in New York? It can move tomorrow.
So what happens is that the lower rungs of the economic ladder are left holding the bag. Taxes spiral upward and services are systematically cut. Poverty and crime escalate, people suffer. If we accept that human misery is a form of immorality - at least, when we know we could have prevented it - then you understand how high levels of taxation are immoral.
This is a message that all Republicans need to internalize. Only then will they become effective advocates. (Incidentally, I'm not being partisan here. I welcome Democrats to internalize it, too. I'm just not holding my breath.)
Posted by Scott at 9:44 AM