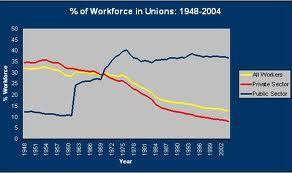 It is becoming increasingly clear that the biggest threat facing our country is not Al Qaeda, the recession, or the Kardashian sisters. It is public sector unions. FDR and others warned us that they shouldn't exist, but we didn't listen. And now your kid's teachers are millionaires. No kidding, but more on that in a moment.

I would argue private sector unions no longer serve a purpose, either (other than slowly bankrupting industries), but at least there is an honest negotiation. Labor and capital. They both need each other to survive, and they can compromise from opposite sides of the table.

With public unions, there is no opposite side. This is something that was lost on 95% of the American public until the last year or so. I can still picture the odious Jon Corzine addressing a crowd of public employees. In full campaign mode, he hollered, "I'll fight to get you a good contract!"

Fight whom? Himself? He's the one who's supposed to represent you and me, after all. The taxpayer.

So you have politicians negotiating with unions, the same unions that will recycle their loot back to the politicians in the form of campaign contributions. And TV ads. And phone banks. And canvassing. And screechy rallies attended by the pliant media. This is completely legal, institutionalized corruption, and it's the kind of thing that, in the private sector, lands you in front of a public prosecutor. But then, we've never held our politicians to the standards to which we hold the rest of society...

Politicians have no incentive to do anything but give away the store. The diffuse interest of the taxpayer is not present at the table. I imagine that in the back of their heads, in a place they rarely allow their minds to wander, they all knew this would lead to disaster. But the odds of this happening on their watch always seemed small. Others could be left to clean up the mess on some other, distant, day.

Welcome to that day.

Many of our states, including my own, New York, are functionally bankrupt, and given the future promises they have made, it is not clear how to solve the problem. In New York, for instance, pension guarantees are protected by the New York Constitution. Good luck changing that.

How big are these promises? Let's get back to my millionaire claim about teachers, which on the face of it, should seem preposterous. Teachers are by far the biggest public employee category, and their contract terms are illustrative of what goes on elsewhere. In my town, a teacher retiring today gets 70%, give or take, of his or her salary for the rest of his or her life. That's about $84,000 a year (not taxed by the state, incidentally). Plus, they get health benefits for their entire family for life. That's worth another $16,000 a year, for a total of $100,000 a year. Live for 25 years and that's a total 0f $2.5 million. Discounted at 4%, it's $1.6 million.

To quote our president, "let's be clear": there is zero difference between this and having an IRA with a value of $1.6 million, except the rest of us didn't demand that taxpayers fund our IRAs.


But it's much worse than that. You see, I have done what few have ever done, something so unsettling I wouldn't wish it on my worst enemy: I have actually read all 115 pages of my town's teachers contract (which is a typical one, by the way).


Here are some of the highlights:

That's only a taste.

There is a reason all this is structured this way: to make it very hard for you and me to figure it out. I call it backdoor compensation. We are shocked enough to discover our friendly 2nd grade teacher scoring six figures; imagine how we'd feel if we knew the real number. Teachers unions are vile, but they are not dumb.


Many of us grew up with the Berlin Wall. Its existence seemed a simple fact of life, and few of us had any notion it would disappear in our lifetimes. Then, almost overnight, it was gone. This is the nature of unsustainable paradigms: their outward appearance can remain unchanged for years, but the pressure mounts underneath. When that pressure can no longer be contained, its release is sudden and shocking.


The Berlin Wall moment for public unions is fast approaching.