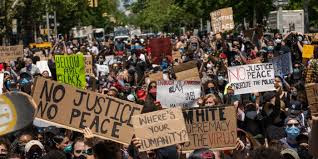 So, why do we say systemic racism, and not just racism? Why systemic?

It's important to understand the words and phrases that so thoroughly penetrate our national discourse, because most people don't.

Systemic racism is not about specific instances of racism. Rather, it is the belief that racism is imbued in our national DNA, in our system. It looks to broad, racial outcomes as evidence. Any disparity in result is a priori proof of systemic racism.

Ibram X. Kendi himself, the man at the very pinnacle of the "Anti-racism" power structure, says, "Racial discrimination is the sole cause of racial disparities in this country."

The sole cause. Nothing else. Not fatherless homes. Not personal choices. Not school quality, or culture, or even luck.

As long as racial groups perform differently, there must be racism. Systemic racism.

If our system is racist, then we must ask, what does our system consist of? The answer to that is institutions, of course. The government, corporations, schools, foundations...

And this is where I have a real problem with the whole thing. But first, let's be clear, there was a time in our country where most of our institutions were racist. You don't even have to go back too far in our history; certainly within my lifetime. (Note: I'm primarily addressing racism against blacks here, because that's what Critical Race Theory and "Anti-racism" deal with. I'm perfectly aware you could make a systemic racism argument today where "white-adjacent" groups are concerned, i.e. Asians and Indian-Americans.)

But matters have changed radically in the last few decades. I am unaware of any institutions that don't give special preferences to blacks. Many significantly so.

Everyone knows this, but it's a truth you can't speak, particularly if you rely on someone else for your paycheck.

Whether you think such preferences are the right thing to do is a discussion for a different day. But it's an unarguable fact that they exist.

The government and public schools certainly do.

Universities certainly do. The average SAT scores for black students at places like Harvard is several hundred points lower than other students.

Corporations certainly do. In fact, they are desperate to hire more black candidates, and are often frustrated in their efforts to do so. Same goes for finding board members. The CEO of Wells Fargo, Charles Scharf, got in hot water recently when he said, "The unfortunate reality is that there is a very limited pool of black talent to recruit from."

Does he have a point, or was he being racist? Blacks are 12% of the population, but they are only 7% of the pool of college graduates. How is Scharf supposed to get to 12%? I suppose he could, but then other banks would be left woefully short in this zero-sum game.

Here's the rub: representation of less than 12% is viewed by the Ibram X. Kendis of the world as case-closed proof of racism. Similarly, if a neighborhood is less than 12% black, it must be because of racism.

Remember, this is all about group results, not individuals.

(Aside: that blacks are underrepresented as college grads is worthy of serious discussion, even if it's not something Scharf can solve as CEO of a bank. The problem is that you can't get to the heart of the issue without discussing the absence of black fathers or the failure of teachers unions to actually teach, and those are places you are not allowed to go.)

Systemic racism is the Big Lie because our institutions are not racist. They actually have become the opposite, seeking absolution for past sins - sins committed long before anyone currently in charge was involved in any way.

But we will never get to racial nirvana if we measure everything by groups. Groups will always perform differently, and for many reasons. This is a convenient state of affairs for DEI race hustlers because as long as differential outcomes exist, systemic racism can be blamed, and you will need their blessing to function.

The revolution becomes permanent, and unless you want it to come for you, you'd better shell out for a DEI consultant and get that seal of approval. (For as long as your checks clear, anyway.)

As a conservative, I believe that individuals have rights, not groups. If there are acts of racism against individuals, I want to know about it, because it goes against everything I believe.

But notice I said acts.

If a person is guilty of acts of racism, let's call him out, even prosecute him if laws have been broken.

If an institution is committing acts of racism, same thing. Shame on them, and there are multiple paths for remediation.

We conservatives want to solve problems.

The DEI movement does not. That's why the very definition of racism gets ever-more-nebulous. Now we have "microaggressions" and "unconscious bias," which can be so subtle that neither the victim nor the perpetrator knows they're happening. Then there's "cultural appropriation," of course (without which we wouldn't have the Beatles - just sayin').

There's an endless word salad of new, ever-more-nuanced transgressions. Just yesterday, I learned the word misogynoir. (That means bias against black women, in case your Oxford English Dictionary hasn't been updated in the last 24 hours.)

But solving the problem of race means the Great Race Hustle goes away, so true solutions must always be another DEI-training-session-out-of-reach.

Thus, racism is in the air we breathe and the water we drink. It's in a look or a glance, or the food we choose to cook. It's in the Classics, and Twain, and To Kill a Mockingbird.

Oh, the things you can't do!