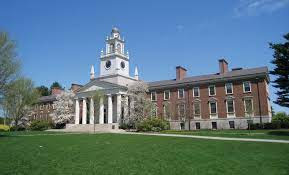 Our nation's most storied and elite schools are increasingly becoming a parody of themselves. What was once a completely proper effort to broaden horizons and become more inclusive has turned into a self-parodying fetish. Our schools are now full fledged participants in the drive to dismantle Western culture.

Lots of people say to me, surely the pendulum will swing back. People are waking up, right?

Sometimes, when pendulums swing too far and they become wrecking balls. There's nothing left to salvage.

Someone reached out to me about the board chair of one of the schools I've been writing about recently, telling me she's a "perfectly lovely person." I'm sure she is, most of them are, but "perfectly lovely people" are presiding over the collapse of our culture.

The road to hell is paved with good intentions, as they say.

Andover, possibly the most prominent secondary school in the country, is fully onboard the woke/CRT/anti-racism train. Their board backs the move entirely, as does the administration and presumably the teachers. Many of the kids do, too, but they're kids and they are only behaving the way Andover says they should.

Not all the alumni and parents are happy, though. I know this because some have reached out to me.

For starters, the board wrote the following to the Andover community (my comments in bold):

To the Andover Community:

On behalf of the Phillips Academy Board of Trustees, we acknowledge that this is a profoundly painful time in our country, marked by a series of tragic acts of violence against George Floyd, Breonna Taylor, Ahmaud Arbery, Tony McDade, and countless other Black people in the United States. For those who are hurting, please accept our heartfelt compassion and support. In the face of widespread anger and chaos, we stand together in solidarity for what is right and just.

Breonna Taylor? The police were being shot at by her drug-dealing boyfriend. Tony McDade? Body cams show he was pointing a gun at the police, and he was a murder suspect. A grand jury fully cleared the officers. Ahmaud Arbery? Racism, although the police had nothing to do with it. George Floyd? Horrible, but very swift justice has been served - and zero evidence was ever presented that this had anything to do with racism.

The fact is that the data do not support the narrative of the police out hunting unarmed young black people. Most think that thousands are shot every year, when the actual number last year was nineteen. More unarmed whites were shot than that. This is in the context of 10 million arrests.

We reaffirm Andover’s commitment to educate youth from every quarter, and in doing so, preparing students to combat systemic racism in our institutions and our country.

Racism exists in this country, absolutely, although it is far less prevalent than it used to be. But "systemic" racism? Absolutely not. Read this to understand why. We are a better country than that. But Andover is eager to join the parade of self-loathing.

Across generations of students, faculty, staff, alumni, and parents—of myriad races, cultures, and identities—we have gathered over these recent days to grieve, to express outrage and frustration, and to support one another. We have heard and read painful personal experiences shared in virtual gatherings and social media.

To the Black members of our community and beyond: We see you; we hear you; we are suffering with you. We acknowledge that Black Lives Matter and support the movement.

When you capitalize "Black Lives Matter," you are not making a generic statement supporting blacks. You are citing a specific movement run by a specific organization, one that is avowedly Marxist and wants to tear down the entire fabric and history of our country, right down to the nuclear family. This is not hyperbole, this is from their own statements and actions.

Our 2014 Strategic Plan, Connecting Our Strengths, placed Equity and Inclusion as a central pillar upon which we remain accountable. We must re-examine that pillar, with new context, and ask how Andover can have the greatest impact in the ongoing battle to dismantle systems of racism and oppression.

Andover is the most liberal, diverse place imaginable. It is run by progressives for progressives. If they are racist, it's progressives that are responsible. But consider that whites comprise a mere 29.6% of the students, despite being 76% of the U.S. population. Andover's "2021 State of the Academy" offers such demographic options such as "genderqueer," and 49% of the female students identify as one of the following: bisexual, demisexual, homosexual, pansexual, queer, or questioning. 72% are feminists. For good measure, 2.6% identify as communists.

The headmaster is a black, married gay man and a school parent. The Dean of Students is a married gay woman with four kids who have attended. If a boy wanted to go to class every day in drag, I am assured there would be no objection. There are plenty of fully-out gay kids at Andover and I'm also assured by students that no one makes anything of it. And yet, Andover still feels the need to imagine itself as being part of the systemically racist/misogynist/homophobic American fabric.

Andover is proud of its intentional diversity, and while we have made efforts to create an equitable and inclusive community, we know there is more we can and must do. Guided by the Equity and Inclusion Committee of the Board of Trustees and working closely with school leadership, including incoming Head of School Dr. Raynard Kington, Andover will take the following actions:

The concept of "equity," which very specifically means equal results, is completely at odds with the ideas of meritocracy and excellence, which are things I imagine Andover also claims to care about. (To understand fully what equity means, read this.)

We will continue to hear one another and expand upon what we’ve learned from the scholars and educators who have engaged with our campus community. We are especially inspired today by the ideas and work of Patrisse Cullors and Ibram Kendi and the perspective of author Robin DiAngelo.

Cullors is an avowed Marxist who has somehow enriched herself since starting BLM, buying millions in real estate. She is resigning over the controversy. Kendi says that anytime blacks aren't 13% of an outcome, there is by definition systemic racism. No allowance for other factors like culture, personal choices, random chance, or anything else. Your company doesn't have 13% blacks? Racist. Your town comes up a bit short? Racist. He believes the only solution is reverse racism. Martin Luther King be damned. DeAngelo is a big CRT advocate who wrote White Fragility, pioneering the convenient intellectual mousetrap that white people who object to CRT are themselves, ipso facto, racist.

Charting a way forward is the responsibility of every one of us—and needs the strong minds and generous hearts of our campus community and our extended family of alumni and parents. This work is especially crucial for our students, who will apply what they’ve learned on and off campus across a spectrum of urgent societal needs.

Andover has made deep and meaningful progress to date. In these challenging times, Andover must stretch itself in the pursuit of excellence and its mission of achieving knowledge for a greater good.

Again, you cannot pursue excellence and achieve equity at the same time. They are mutually exclusive.

The students also seem on board with all this, other than the closeted conservatives (95.2% of whom say they self-censor). Just recently, four members of the girls lacrosse team resigned as a "direct response to the racism, homophobia, and classism upheld by both the lacrosse program and Andover athletics."

They called for students to dress in all black to express their solidarity with all those athletes who have felt "othered."

As day follows night, the Andover administration put out a statement of solidarity.

I don't blame these girls, which is why I'm not naming them. They are perfectly distilled products of their environment, utterly convinced of the presence of racism in the very air we breathe. If they didn't arrive at Andover that way, Andover made sure they got that way.

As a generation of these students graduates from Andover and other institutions, it will be interesting to see how many choose to give back to schools that told them they were hopelessly racist.

Of note: it was only before the last game of the year that these girls decided to make their statement, having otherwise enjoyed a full season. Presumably the racial makeup of the team was the same for the first dozen games.

Alums and parents: STOP FUNDING THIS!

As always, I will finish with the names of the Perfectly Lovely People, otherwise known as the Andover board. These are the people who could stop this blatant divisiveness, but instead choose to promote it.